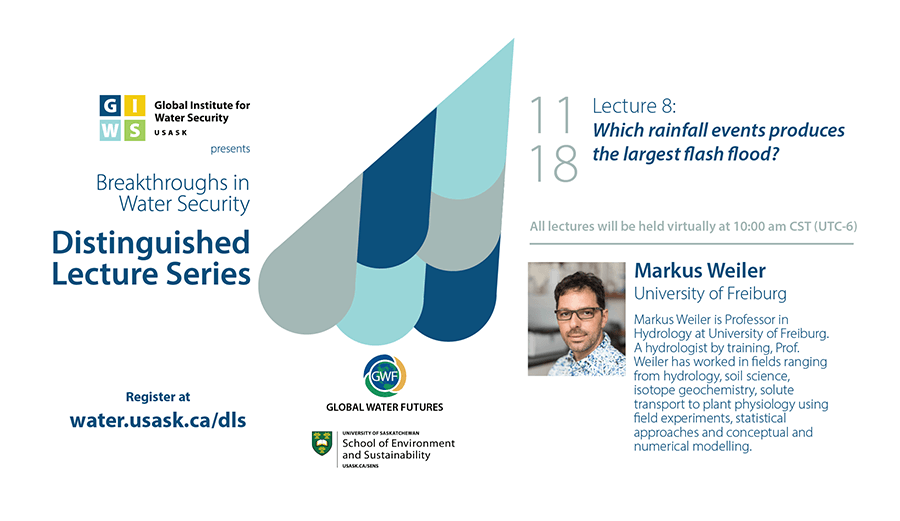 A hydrologist by training, Markus Weiler has worked in fields ranging from hydrology, soil science, isotope geochemistry, solute transport to plant physiology using field experiments, statistical approaches and conceptual and numerical modelling. After graduating in Hydrology from the University of Freiburg, Germany, he obtained his PhD in 2001 from the ETH Zürich, Switzerland working on preferential flow processes in soils. After a 2 year post-doc at Oregon State University, USA, he was appointed Assistant Professor and Chair of Forest Hydrology at the University of British Columbia in Vancouver, Canada. Since 2008, Markus Weiler is Professor in Hydrology and was director of the Centre of Water Research at the University of Freiburg, Germany. Markus Weiler established a modern stable water isotope laboratory and set-up several hydrological observatories in urban, agricultural and forested catchments. He also founded the MSc programme in Hydrology offered at the University of Freiburg. Currently, he is also Dean of Studies in the Faculty of Environment and Natural Resources and President of the German Hydrological Society.

This lecture is part of the GIWS Distinguished Lecture Series 2020. Click below for more information on the series, including a full schedule and an archive of previous years.